Anita Pacylowski is a native of Columbia, MD. She started ballet at the Columbia Conservatory Ballet in Columbia, Maryland and the Reston Conservatory Ballet with founder Julia Cziller. She continued her training at The Washington School of Ballet in Washington D.C. under the artistic direction of Mary Day and associate director Patricia Berrend. Her senior year in High School, she received the Princess Grace Award in Dance, National YoungArts Level 1 winner, and received the Presidential Scholar in the Arts in Dance award at White House. She also was a finalist partnered by now National Ballet of Canada’s Executive Director Barry Hughson at the New York International Ballet Competition in New York City, and semi-finalist at the Prix de Lausanne competition in Lausanne, Switzerland. She’s been nominated for the coveted Benois de la Danse Award “the Oscars” of the Ballet world. 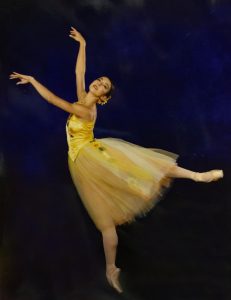 Throughout her school training, she credits her vast exposure to some of the best teachers, dancers and choreographers at the Chautauqua Institution in Dance in Chautauqua, NY. She trained and performed for fourteen summers as both a student and a founding company member under the artistic direction of Jean-Pierre Bonnefoux. Teachers and choreographers include Patricia McBride, Violette Verdy, Michael Vernon, Alonzo King, John Clifford, Peter Pucci, Graham Lustig, Mark Godden, Jacqulyn Buglisi and Connie Dinapoli. She also met Artistic Director, Salvatore Aiello and Ballet Mistress, Jerri Kumery in Chautauqua, which lead her to join the North Carolina Dance Theatre (Charlotte Ballet).

In Charlotte, she performed as a Principal Dancer, for seven years with NCDT under the Artistic Direction of Salvatore Aiello and then after Jean-Pierre Bonnefoux and Patricia McBride. She performed the late Artistic Director Aiello’s masterpiece Rite of Spring, Alvin Ailey’s Feast of Ashes, Alonzo King’s Chants, Dreamer and MAP, Paul Taylor’s Company B and Esplanade, Vincete Nebrada’s Pentimento and principal roles inBalanchine’s Serenade, Rubies, Concerto Barocco, Allegro Brillante, Tchaikovsky pas de deux, The Four Temperaments and Who Cares? This is where she metfellow dancer Hernan Justo and danced many roles together. Hernan purposed to Anita onstage after a season performance, in front of thousands of people.

She came to Carolina Ballet Theatre in Greenville, SC to join her husband as artistic leadership of Carolina Ballet Theatre. After the birth of her daughter Sofia, she trained with her husband to be a founding member of the professional dance company. In 2004, she became director of the School of Carolina Ballet Theatre after founder Barbara Selvy retired. She continued to dance with the founding members of the company and join them both nationally and internationally on tour. After the birth of her second child, Nicolas, Anita delved deeper into choreography such as The Four Paintings of Frida, Afternoon Delight and Mahabutha on CBT. During that time she also coordinated and facilitated many of CBT’s arts integration work through Metropolitan Arts Council’s SmartArts program. She retired as principal dancer of CBT in 2011, after nearly ten years with the company.

As co- artistic director of DanceArts Greenville for 17 years, her goal is to provide high-level training in a family friendly environment. She continues to guest teach in ballet and contemporary, and choreograph new works at dance schools across the Northeast and Southeast, and to discuss dance education with many of the top directors and teachers in the world. She is the lead teacher for DAG’s presence at Stone Academy’s Encore program for the 2nd year.  This is program brings the art of dance to students in their school.

In 2017, she joined as an Associate Director of the Charlotte Ballet Academy. The Charlotte Ballet is where Anita met her husband and danced for 7 years. Both, she and Hernan danced together and returning back as a director has been wonderful reunion with her peers.  She shares her time directing as well as teaching, coaching and developing currciulum. This upcoming 2020/21 season, due to the COVID-19 and restructure, Anita will not be joining the organization but looks forward to consult when the needs occur and returning when the world is in a better place.

Anita would like to thank her family in Columbia, MD, who continue to support her adventures in the Art of Dance. Her parents, John and Sun Pacylowski instilled a love of hard work, family-owned business operations and strong dedication and leadership to raising all three of their children with a broad spectrum of arts and athletics. 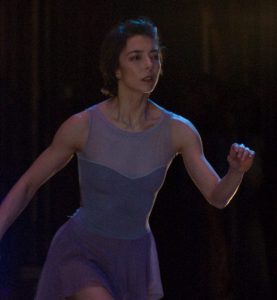 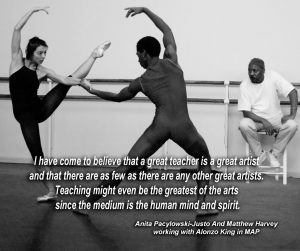